..
A lone Jewish settler challenges Israeli security officers during clashes that erupted as authorities cleared the West Bank settlement of Amona, east of the Palestinian town of Ramallah. Thousands of troops in riot gear and on horseback clashed with hundreds of stone-throwing Jewish settlers holed up in this illegal West Bank outpost after Israel’s Supreme Court cleared the way of demolition of nine homes at the site. 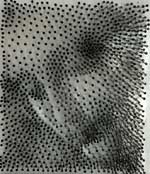