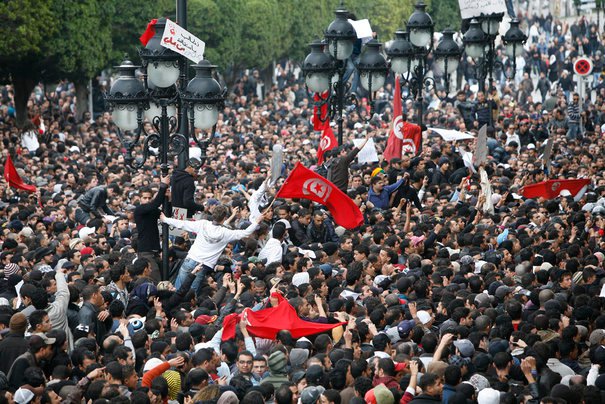 A photograph made available on 15 January 2011 showing demonstrators gathering in front of the Interior Ministry during a protest against Tunisian President Zine El Abidine Ben Ali, in Tunis, Tunisia, 14 January 2011, after Tunisian President Zine El Abidine Ben Ali's address to the nation. Reports state that Ben Ali said he would not seek another term in office and ordered police to stop firing on protesters as he sought to quell mounting unrest. The 74-year-old leader also admitted that he had mishandled a spreading wave of unrest and promised democratic reforms. Ben Ali also made clear that his forces should no longer use lethal force against demonstrators, after rights groups said at least 66 people had been killed. Ben Ali escaped the country at the end of the day and went to Saudi Arabia. EPA/LUCAS DOLEGA